Robotics: Different from RPA and AI

<p>Routine tasks to robots and focus on the critical activities.</p>

Robotics: Different from RPA and AI

Robotics: How is it Different From RPA and AI for Businesses?

Robotics is the interdisciplinary combination of science, engineering, and technology that designs, develops, and operates programmed mechanical robots, to replicate or replace human actions.

Customer expectations are fast changing, putting pressure on businesses to become more agile and efficient in their operations. Companies, to address this challenge, are embracing technology including the implementation of robotics to automate various processes and tasks. To sustain and grow in today’s dynamically evolving markets, companies need to be strategically planning and making decisions to remain cost-efficient and productive.

Robotics allows employees to leave the routine and low-value tasks to robots and focus on the most critical activities to make their businesses competitive and deliver a better customer experience. The use cases of robotics include caretaker robots in residential complexes and shopping malls, robotic arms in manufacturing operations, and last-mile delivery robots to robots performing sanitation, cleaning, and hazardous works, assisting surgical procedures and participating in rescue operations. 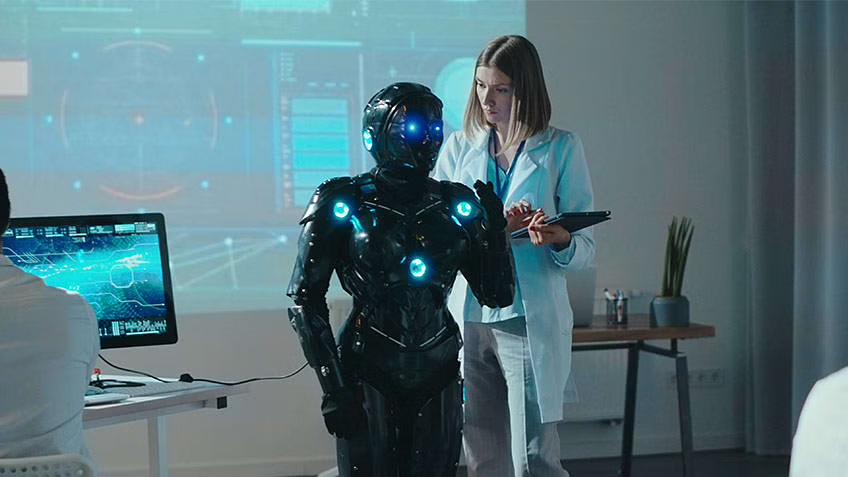 A robot is a programmable machine that can perform tasks it is designed for, while the term robotics refers to the technology that designs, builds, programs, and operates robots to carry out a range of tasks and actions. It may be noted that robotics and artificial intelligence are often used interchangeably but are different. While robotics involves hardware and software, AI is only software. The major difference is that while robots perform tasks based on the preinstalled program instructions, artificial intelligence employs algorithmic logic to allow a program to think, learn, and self-improve like a human does.

While the robotics segment is evolving along with the advancements in other technologies, some basic factors that define a robot are that they interact with the physical world through sensors and actuators, are programmable hardware machines, and are fully or partially autonomous. The term robot came from the Czech word robota, which means “forced labor.” The word was first used in the 1920 play R.U.R., which tells the story of a company using the latest scientific knowledge to mass produce workers who lack nothing but a soul.

These are the kind of robots that have to be told in advance in the form of program codes what and when to do the tasks they are programmed for. They typically perform routine, but monotonous tasks as per the instructions of the program but cannot deviate their behavior from its inbuilt program during its actions, unlike artificial intelligence. A mechanical arm in the assembly line of an automobile plant is an example of a pre-programmed robot. The arm normally serves one particular function tirelessly, faster,  and more efficiently than a human.

These robots look like humans even having human-like faces and expressions and replicate human behavior or actions. They usually carry out activities that human does like walking, running, jumping, lifting, throwing, carrying objects, etc. The most notable examples of humanoid robots are Hanson Robotics’ Sophia and Boston Dynamics’ Atlas. They seem technically similar to Autonomous Mobile Robot (AMR), but they are different.

They are mobile robotic solutions designed to operate autonomously without human supervision or support. They use sensors and cameras to get a sense of their surroundings, analyze the collected information, and make informed and optimal decisions. Examples of autonomous robots include the cleaning bots like Roomba vacuum cleaners, medical delivery robots, autonomous drones, etc. A version of AMR, though not autonomous but automated, Automated Guided Vehicles (AGVs)are commonly used to move and deliver materials in warehouses and shop floors.

Also known as robotic arms, they are meant to perform the functions of a human arm, with typically two to 10 rotary joints, allowing for a greater degree of motion. The use cases of this robot include arc welding, material handling, machine tending, and packaging.

Unlike other types of robots that perform their tasks independently, cobots are designed to work alongside or directly with humans to help them accomplish better productivity and efficiency. They find use cases in eliminating manual, hazardous, or strenuous tasks from day-to-day workflows. Some of the cobots are intelligent enough to operate by responding to and learning from human motions.

They are bots controlled by humans from a distant place through a wireless network connection. These robots are usually employed in extreme or unfriendly geographical conditions, terrain, and weather. Examples of teleoperated robots include submarines used to fix problems on an underwater oil rig or telecom fiber optical or drones employed to detect landmines in a war.

Augmented robots or human augmentation is a new development in robotics where technology integrates with the human body and brain to help humans enhance or replace human capabilities or overcome human incapabilities. The most popular examples of augmented robots are robotic augmented prosthetic arms or legs or any other limb to help disabled people who have lost their limbs in the course of some action.

Artificial intelligence brings unparalleled autonomy to robotics, allowing them to think, react, learn, self-correct, and improve without any human supervision or help. This allows AI-enabled robots to handle more complex tasks that need the application of mind and brain and as well increase efficiency, reduce errors, and accelerate production, all without the need for human intervention. Despite the fact that AI robot is in their nascent stage, the current examples of AI robots are stunning in their capacity for nuanced work and give us a glimpse at our future.

Software bots, short for robots, are computer programs designed to perform specific tasks, such as automating repetitive or virtual tasks or mimicking human users, among others. While robots are pre-programmed physical machines that perform certain pre-determined tasks, software bots do not involve any robots but programs that run various automated applications. Examples of software robots include Search engine "bots" that roam the internet, scanning websites and categorizing them for search, Robotic Process Automation (RPA), and Chatbots that pop up on websites to talk to you when you are on certain websites, etc.

We will see many sophisticated robots in the future with the advances in various technologies like AI, ML, IoT, etc, making revolutionary concepts like smart factories, aka Industry 4.0 or Factory of the Future, successful. The robotics industry is destined to make what we read in science fiction or watched in sci-fi movies a reality, like working in the deepest depths of our oceans to thousands of miles in outer space. Many businesses need automation that includes robotics for their survival and growth. SMEs cannot implement this themselves or afford to have a team to do it. This is where Task as a Service (TaaS) platforms can help you to implement robotics in your business to enhance the efficiency and productivity of your operations.