<p>Small to medium businesses should not miss the opportunity.</p>

In most aspects of business, professional and personal lives, contracts play a pivotal role to regulate transactions between two or more parties. Rather than the typical contracts we commonly know, smart contracts are program codes that digitally automate the execution of agreements so that all parties participating in the contract will get updated on the outcome instantly without the involvement of an intermediary or central authority.

It was Nick Szabo, an American computer scientist, who proposed a smart contract for the first time in 1994 and invented a virtual currency named Bit Gold in 1998, a decade before the bitcoin was created. In 2008, the bitcoin blockchain was developed for creating bitcoin, the first cryptocurrency. The bitcoin blockchain technology enabled the development of smart contract code that is used to enter the terms of the contract, which paved way for many platforms that facilitate smart contracts, including Hyperledger, Tezos, Corda, and Ethereum - the most popular smart contract platform, which is also a popular cryptocurrency platform. 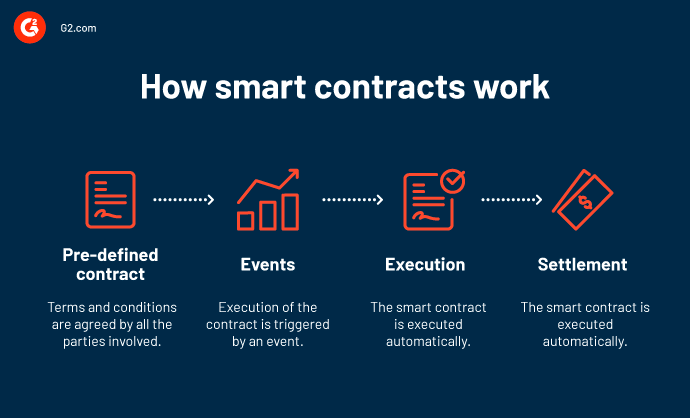 What is a Smart Contract?

Smart contracts are not necessarily legal contracts, though such contracts can also be created as smart contracts. The main function of a smart contract is to make program codes execute a business logic to carry out various processes, tasks, or transactions between two or more parties in response to certain given conditions. They are equivalent to business logic coding in conventional programming.

When a smart contract is created, it’s stored as a block on a blockchain network or distributed ledger. Execution of a smart contract can result in a wide range of transactions like the exchange or transfer of money, releasing funds to parties, registering a vehicle, land, or property, changing the name on title deed or registration, issuing tickets, delivery of services, giving access to content protected by digital rights management tools, allowing the selective release of privacy-protected data to meet a specific request, releasing payment on receipt of shipment, among most other commercial and personal transactions and agreements.

How do Smart Contracts Work?

A network of computers or nodes on blockchain executes actions when pre-programmed conditions have been verified as met by following simple conditional statements “if/when…then…” in coding. Take an example of a simple purchase agreement where if/when the agreed-upon product or service is delivered, then the payment is released to the seller. The transaction that is updated as the block cannot be changed or reversed, and only authorized parties can see the transactions and results.

When developing a smart contract, the parties can stipulate as many conditions and terms as needed to make sure that the task will be completed only after meeting the conditions to the satisfaction of all the participants. Firstly, the participants must determine how transactions and their data are recorded on the blockchain and finalize what conditional statements must be added to handle the possible terms of future transactions considering all possible exceptions and a framework for resolving disputes. A code for the smart contract developed and stored on the blockchain network is run and executed by all participating computers in the blockchain network verifying the transaction to execute the relevant transaction governing the smart contract.

Use Cases and Applications of Smart Contracts

Blockchain ensures the security, reliability, and immutability of smart contracts making information kept in the blocks virtually irreversible and free from human errors. The flexibility of blockchain allows developers to keep most types of data and information in a blockchain and provides a large range of options for the adopters to select from. Smart contracts leverage the power of blockchain technology to perform processes and conduct transactions more securely, efficiently, faster, and with better autonomy.

Smart contracts built on blockchain can add value and benefits to the business operations of almost all types of industries. Deployment of smart contracts in healthcare can benefit from the automation of healthcare payments in the form of reducing, if not eliminating, billing errors and preventing fraud. The entertainment industry can use a smart contract to make certain that they are paid royalties when the work is resued by non-owners. Smart contracts allow the automotive industry to maintain the history and information about accidents, ownership, and vehicle maintenance. When land registration transactions occur, in addition to the traditional paper deed, the buyer receives a digital token that can be used as proof of title to the ownership.

The Future Prospects of Smart Contracts

The potentials of smart contracts go beyond the simple transfer of assets with the range of transactions that include smart health records, legal processes, and crowdfunding agreements to insurance, trade clearing and settlement, supply chain, and financial derivatives, among many others.

There are a lot of chances for errors and lags in Trade Clearing and Settlement which involve labor-intensive workflows that include various approvals, clearing calculations, and complex reconciliations. The traditional Banking IT systems have limitations in reducing or eliminating the discrepancies that can cause settlement delays and costs for resolutions. Smart contracts automate all the workflows, calculations, and reconciliations involved in them, making the process faster and cheaper.

In the supply chain, smart contracts can reduce or eliminate paper-based systems like manual handling of bills of lading, letter of credit, and shipping documents that typically take weeks, and facilitate the transfer of payments once goods are delivered and accepted, all without any central control or manual intervention. Smart contracts can work with emerging technologies like IoT and edge computing devices to not just provide alerts but take action. For example, a utility company can automatically turn off or turn down power-thirsty appliances such as air conditioners when it is going to breach the selected power rate slab threshold. Smart contracts may replace a large portion of lawyers' work related to traditional legal contracts and facilitate real-time auditing and risk assessment.

Businesses should evaluate how smart contracts powered by blockchain can be used to bring efficiencies and capabilities to their own processes. Smart contracts make complex and manual workflows and multiparty agreements, the deficiency of trust between parties, and interdependent transactions, easy and smooth. Implementation of blockchain-powered smart contracts will require an understanding of the complexity of integrations and the new protocols required for implementing applications running on smart contracts for the enterprise. Businesses, particularly small to medium businesses should not miss the opportunity to reap the potential benefits of using smart contracts in their core products and as well in internal systems just because it does not have the required team and infrastructure. This is where Task as a Service (TaaS) platforms can help you to get smart contracts implemented in various business processes to enhance your operations in inexpensive ways.